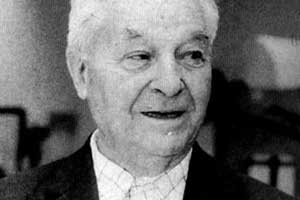 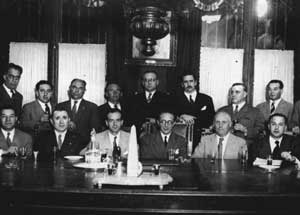 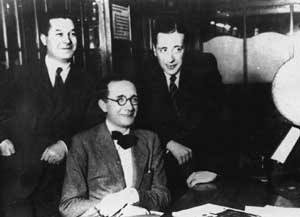 It was the month of March 1897 which saw the birth of Jesús Canabal Fuentes. He came to the world the parish of Pereira, in the place of Amenal, a village which at that time had about 100 neighbors. He was forced to emigrate with just 13 years old, in 1910. Their destination: Buenos Aires. A few years, Jesus begins to work in a company dedicated to the stationery, called “Iturrat House”. In his leisure time, approached and spent hours on the premises of Galician, numerous associations in the capital Buenos Aires. In fact, in 1914, he participated in a foundation of the "Grouping Artist Galician of Buenos Aires".

At just 21 years old named him Manager of the Iturrat Company and sent to the delegation of Uruguay. The international recession led to a crisis in the paper market after the First World War, which closed this branch in Montevideo. Canabal, in an exercise of daring, decides not to leave their profession then founded a small company. Debuxo realizado por Seoane a CanabalWith his brothers José, who was already in Buenos Aires, and Andrés, who still lived in O Pino, open company "Jesús Canabal and brothers, factory of envelopes". The company began to manufacture an envelope with the name of Sweden. In 1921 they expanded the company with the purchase of stationery Jaime Bech, located in a central area of Montevideo. Are they also reinforced with the arrival of another brother, Manuel. In 1925 the company had several local and 40 workers.
Its success lies in the dissemination of envelopes and mergers and capital increases. One of the key moments comes in the year 1937, when Jesús Canabal decides to create a paper factory. "Paper Industry Uruguayan society Anonymous" (IPUSA) is called. The firm came to cover virtually all of the national territory. Given the great demand, the brothers decide to build in the town of Pando, in the Department of Canelones, in 1948, a new factory which gave work to more than 100 people and involved an investment of more than four million pesos of the time. This fact also played a role, and much in the economic development of the hinterland of Uruguay.

Apparently, in his office at IPUSA, Jesús Canabal had shelves full of Galician books, on the walls pictures of Galician artists, as for example some dedicated Luis Seoane. Envelopes made by its prosperous company rested on his table, next to a picture of the Cathedral and the Cross of Santiago.

In addition to their important business facet, Canabal never left aside his dedication to the Galician associations. He participated in most of the groupings and institutions of the Galician community in Uruguay. In the decade of the 1920 joins the creation of the first Galician groups, parallel to the nationalist movement that was forged in Buenos Aires.

In the midst of these currents included characters like Julio Sigüenza, Crestar, Arturo Carril, or Doctor Mosquera... Before the revolt of Franco in the year 36, in Uruguay are important campaigns of solidarity with Republican Spain. Canabal is in first line. Three years later, to the final Civil War, they begin arrive the exiles. Among them Luis Villaverde, Luís Tobio, Gerardo Díaz, Alfredo Somoza,...

In the year 1940, Buenos Aires hosts the foundation of the famous "Galician Sororities". Castelao believed that, in the absence of democracy in Spain, political parties had no value. Therefore, it was necessary to create a patriotic entity that includes all the Galician opposition. In the middle of all this, it ended the Second World War. The opposition, under the Republican flag, prepared for the departure of Franco. For this reason, Castelao believed necessary to found the "Council of Galicia". The setting was Montevideo, and the year, 1945.

It was the first Galician Government in exile. Thus begins a much more constant relationship between Canabal and Castelao, the last President of the Council of Galicia. In one of his trips, on the occasion of the ninth anniversary of the Galician Statute, Castelao visit IPUSA. There is a fact that was reflected in "A Nosa Terra". The chronicle said "were invited the members of the Council to visit the large paper factory that the brothers Canabal possess on the outskirts of Montevideo. A model industrial settlement, which highlights the creative capacity of the Galician people, with what would be our land, if there was freedom in it so their children could develop all its energies and initiatives, having to emigrate to prove their ability, thus enriching the countries where migrants. Canabal, dynasty of Galician in Uruguay, which enjoy much prestige and estimation, for his people skills and his generosity, made of "cicerone" showing the facilities, seeing the paper-making process from the simplest to the most complex."

In 1950 Canabal participates in the foundation of the historic radio program "Always in Galicia", in Montevideo Radio Carve. With him there were other emigrants as Alfredo Somoza, Manuel Meilán, Luís Tobio, Emilio Pita, Pedro Cruceiro and Manuel Leiras. In addition, Canabal had a steering post in the 'House of Galicia of the Spanish Association of Mutual Relief". In 1956 he was appointed President of the first Congress of Galician Emigration, involving the most prominent leaders of exile. Among them were Ramón Suárez Picallo, Alonso Ríos, Xosé Neira Vilas, Luís Tobio and Marcial Fernández.

A designated day, 25 July 1956, Canabal founded the "Banco de Galicia", one of most important financial institutions of Uruguay. Year and a half later, on January 27, 1958, the Galicia Bank opens its first branch in the Central Avenida 18 de julio. Canabal baptizes this branch with the name of "A Coruña" with the idea of putting the new banking premises the different names of the most important cities of Galicia. In his speech, Canabal said "It is not common to feel in the course of life, a satisfaction of nature that is experienced in an act of transcendence and meaning that has this".

In 1959 by initiative of IPUSA, creates the "Society of Celulosas of Uruguay, S.A." to encourage the production of wood in this country. In 1985 the company billed one million dollars per month, in concept of own manufacture and exports to Argentina and Paraguay.

Canabal, Castelao e MeilánIn the chapter of his committed life, noteworthy travel Canabal performed in the decades of the 50s and 60s to Europe. They had a commercial character but Canabal took advantage of them to carry out patriotic tasks and also to visit from time to time, his homeland. On these occasions, he used to bring documents and instructions to the Galician people of the interior, led by Piñeiro, and with its center of operations in the "Galaxy Publishing". Also in this time Canabal was interview on several occasions with César Alvajar, journalist of great prestige Republican, resident in Paris, where he represented the Council of Galicia. He was in charge of the relations of the Galician nationalism with the Republican government in exile. Jesus and César had many things in common. They were liberal, were part of the Freemasonry and fell well.

The Republican government was renewed in the exile. Galicia was represented by Castelao, in the years 1946 and 1947. César Alvajar wanted to back the Council of Galicia have a representative in this new executive. He polled the most influential Republicans, used his links with Freemasonry, very powerful and thinks of his friend Canabal as a candidate, since he enjoyed in addition to great prestige among the emigrants of Rio de Plata. He was a businessman, the President of the Bank of Galicia, liberal and mason. In full negotiations, Canabal visit Paris, Austria, Germany and Switzerland. It is oblivious to the pressures of Cesar Alvajar and Ramón Suárez Picallo to finally be officially appointed Minister of the Government in exile. He is surprised, and argues that it is inconsistent with the Presidency of the Bank. Despite everything, he accepts the appointment as Minister of the Republic in exile. His term lasted from May 1956 to February 1962. The president was the general Emilio Herrera. Jesús Canabal was Minister delegate.

Canabal, activist throughout his life in favor of the Galician community, died on August 29, 1985. It receives a tribute by the Board of Trustees of the Galician culture of Montevideo, the year of his death. In this act, the secretary of the company recites "Galician... always Galician. Jesus was the best representative of a people suffered, laborious, ant hard work, giving father, exemplary husband, faithful friend, sympathetic boss, smile always on the lips, open hand ready to the sincere hug or endearing greeting..." The writer Manuel Suárez Suárez said: "without any disease, slowly, without realizing it, left as he always lived in this world. Is it was wrapped in his proverbial humility that will forever make Jesús Canabal a perfect example of the good and generous Galician"