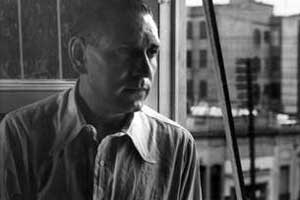 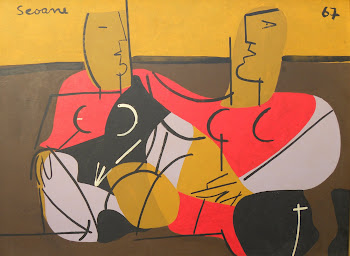 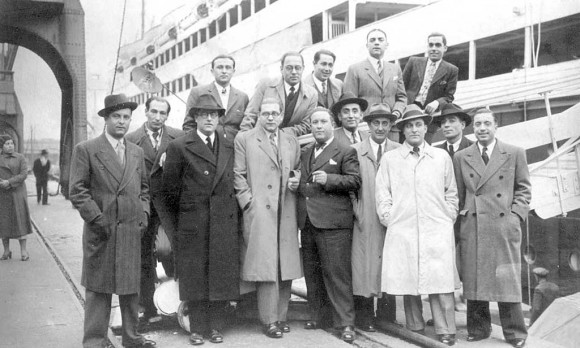 Luís Seoane López was born in Buenos Aires, on June 1 of the year 1910. His father, Luis Santiago Seoane Brocos was Oines, belonging to Arzúa. His mother, María López Mosquera, was natural of Arca. In addition to Luis, they were parents of two children: Rafael (1911) and Estela (1913). The own Seoane said "my father's surname was Brocos. It seems that he had a distant kinship with the Brocos, painter and sculptor of the late 19th century. My mother was Lopez Mosquera, of Arca, Arzúa judicial party; an ancient family which by my grandmother came from the navies of Betanzos and that was developing with the time between Arca and Santiago de Compostela. I was born in Buenos Aires, but my father soon sent me to study at La Coruña. That it was the desire of all the emigrants: that their children were educated in the country that they were working that out. It was also the wish of my father. Of course one could do it and others, as they were not". (L. Seoane's statements to Víctor Freixanes, Unha ducia de galegos, Galaxy, 1982).

The father of Luis Seoane emigrated from Oines in the year 1878. The first work that took was the seller of sardines in Montevideo. Later he worked always as merchant. He settled in Buenos Aires and started up what they called a "cochería", with horse-drawn carriages for weddings and other celebrations. He was a liberal, Republican man. While in this region, their children attended a French school.
Seoane remembers it: "My father (...)was a merchant of a certain culture, friendly people, with a great concern for the problems of the faraway land (and the emigrant Galicia also) and with a motto always putting ahead: You do not ever rely on anyone and that no one has to depend on you. (...) He had to return to Buenos Aires, independent of me, by their political ideas (...) He was a man of advanced ideas, concerned about the things of his time, friend of Argentine intellectuals as Florentino Sánchez, Leopoldo Lugones, Alberto Ghiraldo...(...) He dreamed a State structure made of down-up in which Galicia not only conquered the old administrative freedoms but they enhanced them in their children and inhabitants".

In 1916 the family returned to Galicia, with the intending to stay. After landing in Vigo there are several months in A Coruña, city in which Luis began his primary studies. His mother inherited an estate in Arca, and they decide to build a house. And, by all indications, it is the current building that exists in front of the pilgrim hostel of Arca. Thereafter, Luis and his brother Rafael will go to the Institute in Santiago, sometimes walking to save money on the bus (that is, a walk of 18 kilometres). They were living on Monday morning and returning on Saturday. Throughout the week they lived in a guesthouse on the Rúa de San Pedro, specifically in the number 18. They spent the summer holidays in Arca. His grandmother and the rest of the mother's family had a house now known as the House of Brey, close to the municipal cemetery and with magnificent views of the copper mines that share the municipalities of O Pino and Touro.

Maruxa Seoane commented "grandparent’s house was a large house where many people are together. My grandparents had eleven children... who stayed with them home was Carmen, who was married to a doctor who then installed there his practice. This doctor is surnamed Brey, and was the grandfather of Mariano Rajoy." Another of the children of this woman, Vicente, became Mayor of Santiago and he was who gave to the Arca church its present baptismal font.

Seoane life continues smoothly. At the age of fourteen he takes its first steps as a writer, with the work "The barnacle in ink". When he began his studies of law, the family moved to Santiago. They live in a house in the Rua do Hórreo first, and subsequently settle in number 2 of the Rua de Fonseca, where his mother attended a haberdashery. Luis visits several coffees of Santiago, and he relates with students, writers, painters, etc. In the sentimental section, there is a woman: Maruxa. She same told in an interview with sharpening steel writes (published in O Pino by the sharpening steel Cultural Association) that she saw to Seoane frequently, both in A Coruña and Arca, because they were cousins. He admits that since young they looked in a special way, because against this background he was a hopeless attraction. So much so that only the death of the prolific Galician would separate them. Also says this woman: "we did not have any problem to be cousins. We didn't have children, and if we to have them, it would equal. From a very young we looked in a very special way."

Already by then, Luis Seoane was a true revolutionary. He received many influences, especially of Castelao. These trends were that took him into exile with the advent of the Civil War. The destination was, as no, Buenos Aires, the land that saw it born. There Maruxa and his family moved later. It had Maruxa "when he arrived in Buenos Aires, Luis called me. But I could not go if I was not married. He then sent me a power to La Coruña, where I lived, because my mother wanted that I would be married to me. And it was so. "Husband" made my brother and I got married by proxy. But it was a power that the Church gave and the certificate issued by the Court was necessary in Buenos Aires. So I went and when I came to Buenos Aires I could not lower the boat. He had to get married. But neither Luis let it climb. Thank goodness that helped us with our friend marriage who had formerly lived in Santiago, the Frontini. At the end came the judge to the boat and we could finally marry. Therefore, we got married twice".

In Buenos Aires, Luis lived of his profession, lawyer, while giving rein to their creativity both on paper and on canvas or sculptures and murals. Their relationships ranged from own Castelao to Picasso, passing by Rafael Dieste, Blanco Amor, Rafael Alberti, Cunqueiro, Díaz Pardo or María Casares. But he never forgot the small village that grew: Arca. In his article “Confession” (1965), reads as follows: "neither Spanish nor Argentinian, but from a smaller country, small town, La Coruña, Santiago, village Arca, where were buried my childhood and my youth". Years after his death, his widow commented "the person that did not know to Luis had a false image of him, to anger, but the truth is that it was a great humanity. He had a strong character and seemed that it angry, but the return was and is already happening. The truth was that he had a great culture and humanity. It was all a personality. It was a very simple and loving man talks. He liked much invite people home".

Second Maruxa Seoane, Luis was a true lover of Arca. Thus it bears witness in a virtually unprecedented letter of the year 1978, a year before his death. The title is "I close my eyes and I see":

They live in La Coruña and he doesn't know that the elders of his childhood said that children from the peninsula of the Tower, in the same city, you could see the coast of Ireland on clear days. Perhaps they never knew it. I know that. I remember him. I also know that closing the eyes I see when I want a village, Arca, and to the same village surrounded by mountains, mines, forests and fields, and at the foot of them a clear River, trout that are running put shadows. There are a transparent river in which swimming dragonflies and in the mud of its banks are hiding the eels. I remember people and their work. It was a village of musicians and pipers. There were two bands. Some peasant migrating and others were sailors. The elementary occupations exercised. Was plentiful wild boar in the forests and on the banks of the river the “marta” and everywhere the weasel and the squirrel. In the air or sitting in the trees there are a multitude of birds.

Also I have ever wanted to see the Irish Coast that spoke the old people of La Coruña and I not looked up the cloudless horizon of one day clear opening more eyes than any other day, but it was enough me to close my eyes to see it and, however there was an afternoon of thick fog.

These characters to which I referred, closing his eyes, I just draw them.