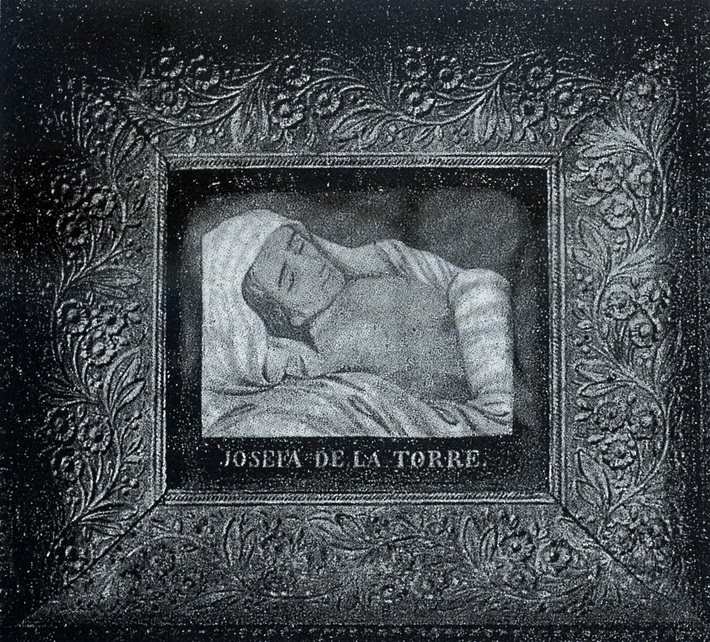 Mystery, religion and history are mixed around the figure of Josefa de la Torre. For many people, she has a holy and for some a scientific case. For all people a woman of interest. The chronicles say that she spent forty years without eating; only taking Eucharist once a month. He lived with spies, tears and faith. Buried with honors from saint, Josefa carried with her the motives and the truth. Today, in O Pino there are several studies and old stories about a woman known as "the Spirited of Gonzar".

Josefa de la Torre was the daughter of Juan de la Torre and Maria Neto. He was born November 11, 1773 in the parish of Gastrar. She was educated by his uncle, priest of Santa Maria of Gastrar. With him, she lived until age 16, when she and her parents moved to the parish of Santa Eulalia de Vigo. By both his uncle and parents, a great religious vocation is inculcated to her. In fact, one of the priests which accompanies her and her particular illness, came to point out that Josefa "observed from his most tender years very inclined all exercise of piety and virtue. Before reaching puberty, he fled from all those childish games that naturally are addicted children. Upon reaching the 12-14 years, time in which ordinarily passions, she was spotted further withdrawal of the chances of the world".

In the parish of Gonzar she lived seven years. There she meets to Roque Tojo and marries whith him at age 23. They settled at Gonzar and had four children: Matias, Manuela and two twins. One died and the other was called Josefa. But the fate was primed with her and Josefa stays widow with three children at the age of 30.

The crucial day was in November of the year 1806. It’s was just when Josefa was 33 years. One day his father-in-law announces the arrival of workers who came to make the "mesh". She tries to convince him to postpone the agricultural tasks, because an imminent storm was expected. But his father-in-law, impatient because he had warned people, ignores their recommendations. The next day, Josefa gets into the kitchen to prepare food for workers. Mid-morning, when men are worked, the sky darkens and starts to rain very strong. Josefa had a good time in the kitchen, sweating because of the high temperature of the room. Without measuring the consequences, she left home to help workers. At this time a chill through his body. Apparently, he suffers a violent congestion of the brain and the viscera spasms. The theory suggests that the character of these attacks was purely nervous. The cause: the impression of cold and moisture on the nerve system.

The attack lasted forty-eight hours. A month later, Josefa is exposed to the cold of December. As a result, it was that is known as an "universal swelling" or anasarca.
The martyrdoms continued and after two weeks communicate to her the death of his mother whit very little touch. The attacks returned, in this time under the gaze of his eldest son, of 10 years. Her members were stopped and Josefa was blind. If this were not enough, also she suffered stomach problems. The swelling increased and in February 1808 breaks by different parties, forming sores which emanated liquids. The days passed and resolved all wounds, less a sore situated where the back loses its chaste name, which was also too deep. Being in a same position, binds and is carnificated the front of the lower and the abdomen back. Some professionals even defined to Josefa as a mummy in life.

So over time, Josefa speaks only with her confessor, José Jacinto de el Río, agreed that live without food. The same think Antonio Mercado and Jacinto Cernada priests. Be ruled out a priori the possible economic benefit, since the family is ample and they do not accept donations from anyone.

Still, appear the doubts in the bosom of the Church. One of their representatives, reach an agreement with a maid of Josefa so watch her, in exchange for a generous reward. This woman discovers something curious: when the other people slept, Josefa stood, sitting beside the fire, and is combed. Then he returned to his bed.
Months and even years spend. Archbishop Rafael de Vélez wants to move it to Santiago to examine her carefully. But Josefa reacts with anger. Declares "while I’m alive, let me sit in my house and book for after my death to break down and to study my body". By this reaction, the Church changes the tactics. The servants were dismissed, being the responsible to watch the patient three Benedictines and a priest.

They ordered that the fire is not light and that no one was closer to Josefa. How were supposed, the watching passed without news. There were 17 days and then they dropped.

In the year 1838, José Varela de Montes, a member of the Compostela Medical School (Professor of Physiology), publishes "History of Gonzar sick". The book explains that the spirited ate at the beginning, but as it was not capable of that food sit you well, let do it. Thirty years after that first attack, Montes Varela describes to Josefa. He says that her face was still full and without unpleasant colour of exhaustion. He adds that her breathing is slow and is nearly blind. It also ensures that her ear is regular, low smell, almost zero touch and whenever he moved issued a complaint. According to Montes Varela, Josefa altered only when it was too cold or heat. Benito Lareu, the priest of Gonzar, in a letter of the year 1837, said "it is true that sometimes she cries because she is seen pouring some tears. She agrees the first Sunday of each month".

Varela de Montes also stressed that the body of Josefa did not need to replenish what not spent: the total lack of urine, saliva, feces, mucous and sweat. A body which, according to different witnesses, among them the captain of the regiment of Castilla, Vicente Vázquez Varela, remained equal. The face, without wrinkles, with a white and smooth complexion; the hair was black and populated. When Josefa had 65 years old, have supposedly come thirty years without tasting food. Finally, the death visited her in the year 1848.

There were many stories that during those four decades and after the death of Josefa, circulated by Gonzar and throughout the municipality of O Pino. In fact, some people said that was Our Lady who washed to Josefa, who was always clean.
Since the death of this enigmatic woman until he received grave spent five days. The funeral was so massive and there were so many people who wanted to see her, that they broke the baptismal stonework of the Church of Santa Maria of Gonzar. The tomb was never opened, even several years ago when the old wooden floor slabs were replaced. Josefa rests in a place of honour: under the altar of Nuestra Señora of Carmen. By the way, that among the many rumors about the spirited also said that the Archbishop's Palace, in Compostela, there is a key to open the grave. Even people commented that some priest opened it and saw the incorrupt body of Josefa, as it was buried.

Today, there aren’t director descendants living of Josefa. She had three grandchildren who died before their one and a half year of life.
Significant are the alleged statements made by her niece to Manuel Riveiro, who was priest in the parish of Gonzar: told him that in the corpse of Josefa appear, after the autopsy, remains of popes of corn in the stomach.